Worldwide Taekwondo (WT) is considered one of the most beautiful and diversely developing types of martial arts. Therefore, it is not surprising that there is a classification, namely three disciplines that hold Taekwondo (WT) competitions KYORUGI (sparring), POOMSAE (moving technique), KYUKPA (breaking objects). 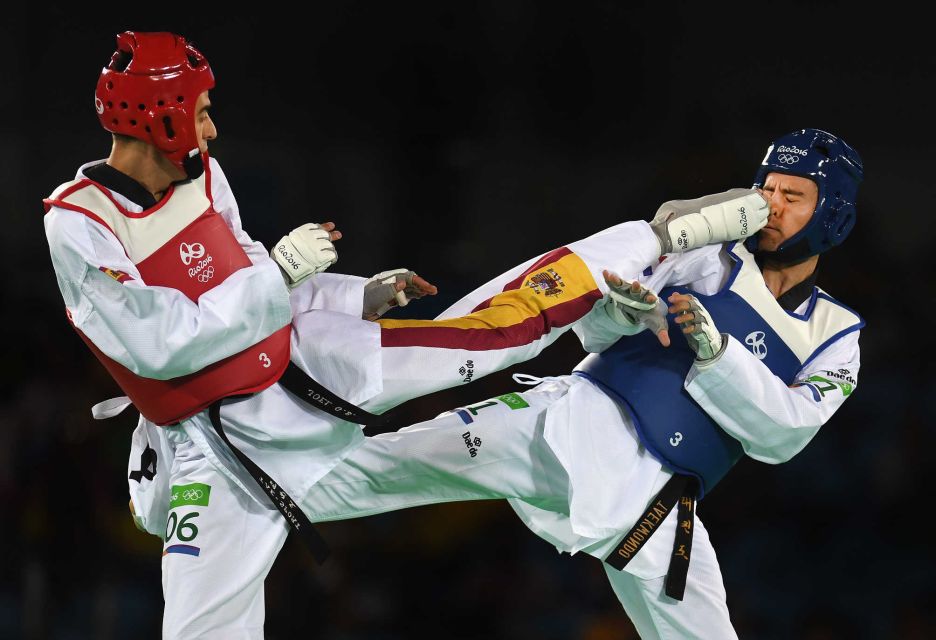 Kyorugi translated into Russian means sparring. In other words, this is a confrontation between two rivals, which in practice makes it possible to check the quality of skills acquired by them during training. Demonstrate the appropriate attacking, protective techniques of hands and feet, the technique of movement, the tactics of conducting a battle. This is an opportunity to maximize the use of a rich arsenal of strikes, to show resilience, endurance, character, the will to win. In a battle at a competition, all athletes follow the official rules, including those concerning the permitted and prohibited zones of striking, permitted and prohibited strikes in a certain zone.

To win, you need good reflexes, determination, speed, common sense and sense of distance. Kyorugi, sparring in the WT version, is an Olympic sport. Olympic weight categories differ from the categories used at national, continental and world competitions. 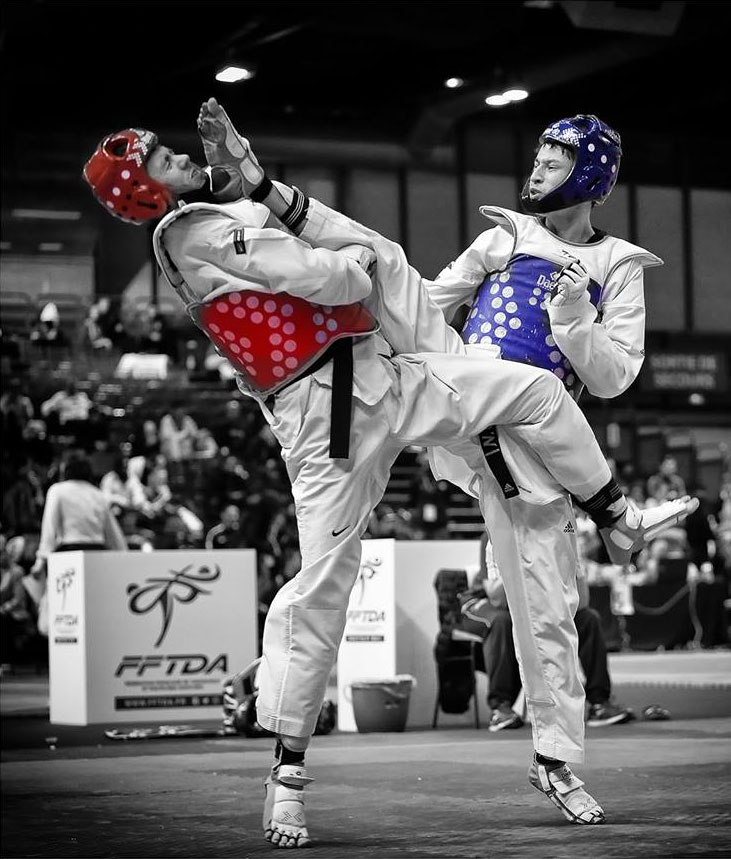 Kyorugi competitions are divided as follows:

According to the final calculations, the team that scored the most number of points becomes the strongest in the tournament. 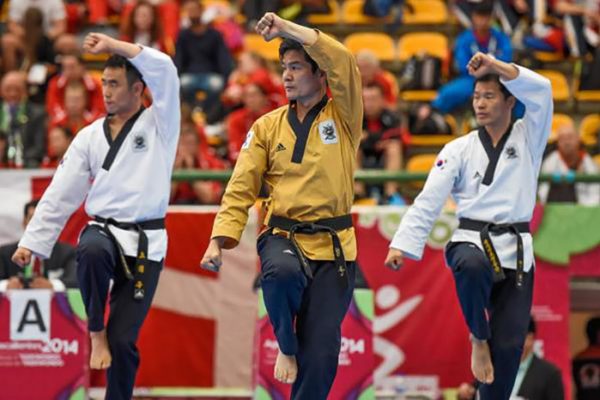 Thanks to the Taekwondo Training Center, Kukkiwon, who systematized and unified Taekwondo techniques, teaching methods and requirements for the qualification of instructors and students, Taekwondo (WT) provides a highly effective training program for taekwondo students based on basic complex exercises – Poomsae. This complex is a combination of attacking and defensive Taekwondo techniques, built in a certain sequence of combinations of techniques of hands and feet, implying a duel with an imaginary rival.

The order of the competition: 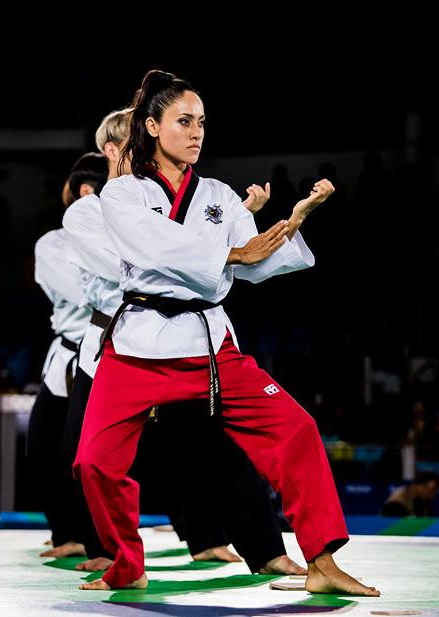 The second circle. Each participant and each synchronous team must perform one arbitrary poomsae.

The third circle is the final one. Each athlete and each synchronous team must perform one arbitrary poomsae.

The athlete must fulfill his obligatory poomsae, corresponding to his dan. The selected poomsae should not be more than 2 steps higher than that required for the corresponding dan available to the participant. All poomsaes should be different. The completed poomsae is estimated on a 10-point scale. The score is divided into HM 0 (ten tenths). The assessment should reflect the overall impression of the poomsae performance. The scores given by the referees are summarized by the tournament secretary. Out of this sum, the highest and lowest scores are excluded. From the remaining sum, the average arithmetic score is calculated. In the case of an equal score in the preliminary or final round, they take into account the highest and lowest score in calculating the average score. If an equal score is still maintained, the highest and lowest score for the previous round is taken into account, etc. Only when an equal score remains after all three circles, an additional fourth circle takes place.

According to the final calculations, the athlete / synchronous team, which scored the most points, becomes the winner of the competition. It should be noted that very often this type of Taekwondo is used in demonstration performances and many athletes specialize exclusively in this discipline. There are separate national, continental and world championships are held on Poomsae. 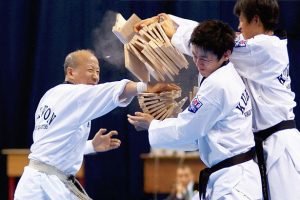 At the present time the last direction of the kyukpa becomes more and more popular, no demonstrative performance can be held without complicated acrobatic blows with breaking of objects. 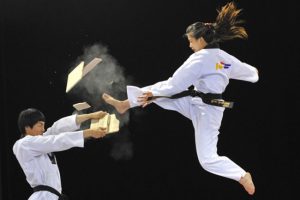 Kyukpa is one of the final disciplines that demonstrate the qualifications and experience of a practicing athlete. The kyukpa in WTF is one of the elements of the certification for colored and black belts. In the version of Taekwondo (WT), power breaking and special technique, breaking objects at a height of more than 2 m, are independent competitive types. 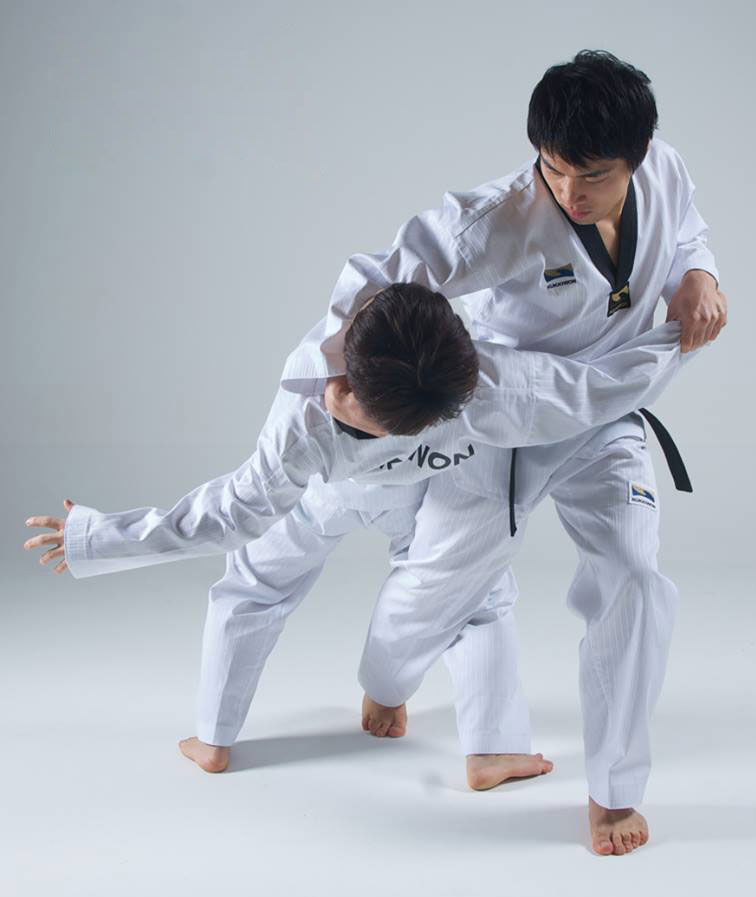 Taekwondo has historically emerged as a means of self-defense, the body for taekwondo sportsman is a weapon, it is capable of attacking and repelling an opponent’s attack with fists, elbows, knees, legs and other parts of the body. All the elements, exercises and disciplines of Taekwondo are somehow aimed at implementing the principles of self-defense.

To leave the line of attack, to use the power and inertia of the enemy, to know the physiology of the person (the main pain points, the direction of the bending of the joints, etc.) – this is what one must possess to resist one or several armed attackers.

Hosinsul is a system of self-defense, which includes the whole spectrum of technical actions that are applicable not only in sports, but also in a real combat situation.

As an independent section, Hosinsul unites all kinds of blows at all levels, throws, painful retention and pain control, as well as the work with applied weapons. 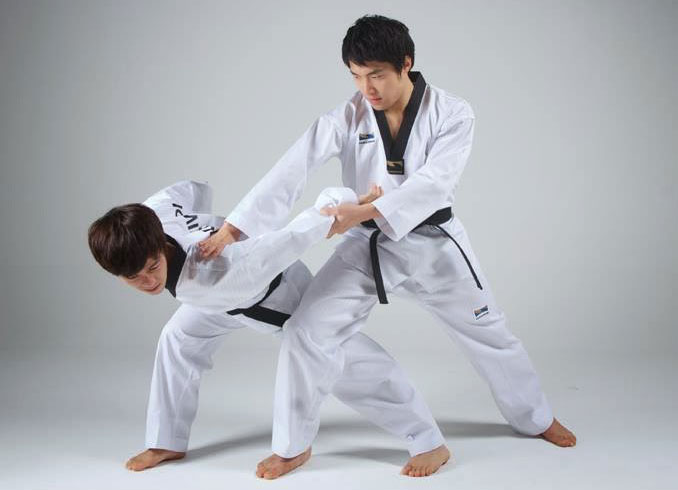 This section helps to develop person’s skills to apply technology not only in standard sports battles, but also in real life. The technique of this section is not regulated by the rules of the competition.

A separate study of Khosinsul, in isolation from the rest of Taekwondo’s knowledge, is pointless and even harmful. Competitions in this discipline of Taekwondo are not held. This kind of program demonstrates applied possibilities of Taekwondo, when one “hero” confronts 2-3 rivals. The athlete must perform a set of mandatory technical techniques; demonstrate slope techniques, release from capture, protection against weapons.