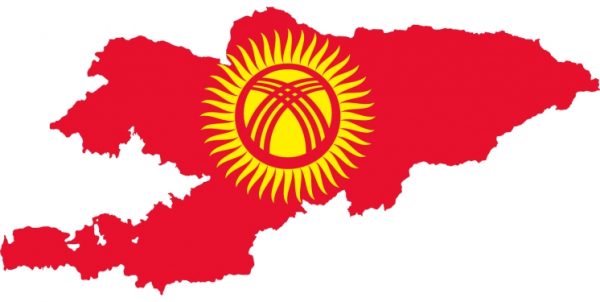 Kyrgyzstan is one of the most picturesque places in the Central Asia, more than two thirds of its territory is occupied by mountains, which is manifested in the diversity of climate, natural landscapes, flora and fauna. After visiting here, you will discover the country of snow-capped mountains; enjoy the view of the sun-drenched harsh peaks of the Tien-Shan. Wild nature with majestic waterfalls and rugged mountain rivers, flowing into lakes with crystal clear water, will amaze you with its beauty.

The pearl of Kyrgyzstan is the Issyk-Kul lake, which does not freeze all year round, will shake your imagination. Until now, many wonderful places and monuments of ancient civilizations have been perfectly preserved on the territory of Kyrgyzstan; the sacred mountain Suleiman (“Solomon”) in Osh, the largest relic walnut forests of Arslan Bab, hot healing springs with thermal waters in Jalal-Abad, the caravanserai Tash Rabat, the Burana tower, the world’s largest clusters of rock paintings Saymaluu Tash.

The Republic is located in the center of the Eurasian continent, at the intersection of air services between East and West, North and South. In the 4-hour flight zone from the airport “Manas”, there are cities: Moscow (Russia), Beijing (China), Istanbul (Turkey), Delhi (India). 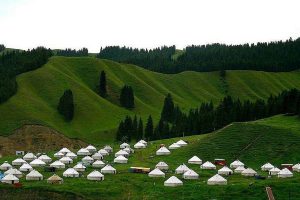 Kyrgyz Republic is located in the north-east of Central Asia, occupying part of the Tien-Shan and the northern chains of the Pamir-Altai. The borders pass mainly along natural borders – ridges of high mountain ranges and rivers, only in some places they descend to the plains of Chui, Talas and Fergana valleys.

Kyrgyzstan borders: in the north – with Kazakhstan, in the west and north-west – with Uzbekistan, in the south-west – with Tajikistan and in the south and southeast – with China (length of the border is 1049 km). The total length of the borders of Kyrgyzstan is 4503 km. The total area of the Republic is 198.5 km2. 94% of the country is occupied by mountains. The average height is 2750 m above the sea level.

The territory of the Kyrgyz Republic extends from west to east for 900 km, from north to south for 410 km and lies approximately between 39 ° and 43 ° north latitude. The highest-raised part of the territory of the republic is on its eastern outskirts. Here, in the mountain knot bordering with China, the highest points of the whole Tien Shan mountain system rise – Pobeda Peak (7439 m) and Khan Tengri (6995 m). From here, the ridges fan out farther to the west and southwest, creating isolated parallel chains, extending mainly in the latitudinal direction by 300-400 km. The highest Chon-Alai (Zaalaysky) ridge is located on the southernmost border of Tajikistan with Tajikistan, where the second highest peak of Kyrgyzstan – Lenin Peak (7134 m) is located. 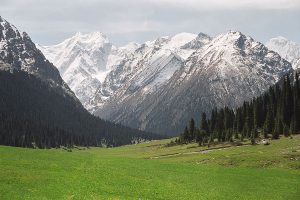 The complex structure of the mountain terrain and the diversity of environmental conditions have caused a great variety of soil and vegetation cover and wildlife of Kyrgyzstan. There are deserts, steppes, meadows, forests, and thickets of bushes, swamps, mountain tundra and other types of vegetation on its territory.

Kyrgyz Republic has a huge reserve of water resources. There are more than 28,000 rivers and sources, 90% of which have a length of 10 km., n the 7 largest river basins. Among them, there are rivers with a high water level. For example, the Naryn River is over 500 kilometers long.

There are more than 2000 lakes and artificial reservoirs in the Kyrgyz Republic. Lakes occupy 3.4% of the Kyrgyz territory. About 90% of them are high-altitude dams and closed lakes. Sary-Chelek is located on the southwestern slope of the Chatkal ridge, at an altitude of 1873.9 m above sea level, and it is a biosphere reserve. 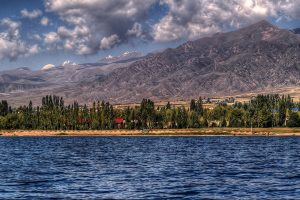 The high-altitude Issyk-Kul lake is located inside the Tien-Shan mountains, at the bottom of a huge tectonic depression, at an altitude of 1606.7 m above sea level. The lake is surrounded by the mountains of Teskey – Ala-Too in the south and Kungei Ala-Too in the north, the Issyk-Kul lake differs from other lakes by its geographic, climatic and hydrological conditions. In form, the lake resembles a trapezoid, the bottom of which face the north. According to recent studies, the length of the lake is 178 km, width – 60.1 km; the area is 6236 km2, the length of the coastline is 688 km, the maximum depth is 669 m, the average depth is 278,4 m. The lake is incredibly beautiful. This is why it is called “The pearl of Kyrgyzstan”. Great transparency and bright sun change the color of the Issyk-Kul lake from soft blue to dark blue tones. In winter, the water temperature is + 4.2 ° C + 5.0 ° C. In July and August, the upper layers of the water are heated to + 18 ° C + 24 ° C. Kyrgyzstan is one of the largest regions where a system of modern mountain glaciers is located, their total area is 8100 km2 or 4.2% of the territory of the Republic. 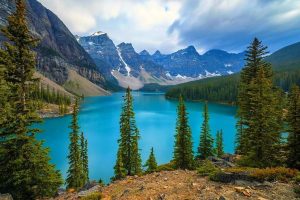 Three-thirds of the total area of glaciers belongs to the river basin of the Syrdarya and Tarim rivers, their main centers are located in the far west, in the Sary-Jaz basin, where the largest glacial valley (South Enelchek, 60.5 km long, Kaiyndy – 29.0 km ), as well as the mountains of Teskey Ala-Too, Kashaal-Too, Ak-Shayryk, Chon-Alai. In the mountains of the Tien Shan, there are glaciers with flat peaks. The reserves of fresh water are about 650 billion m3, which is equal to 12 river resources of the whole republic. 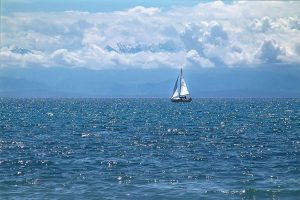 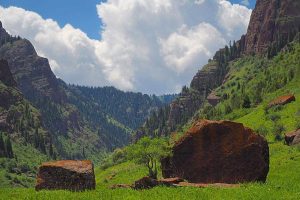 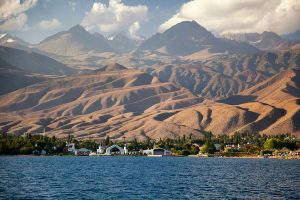 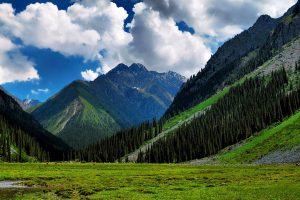 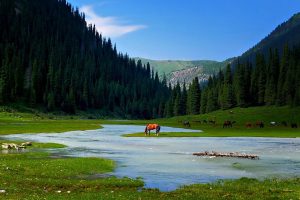 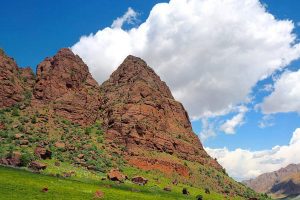 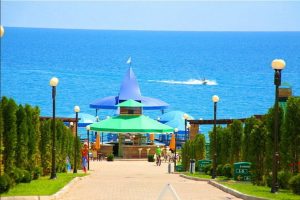 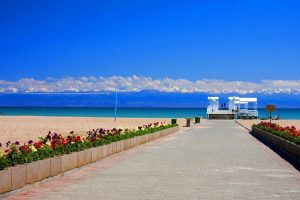 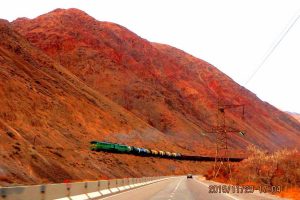 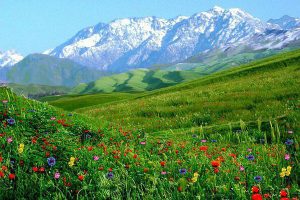 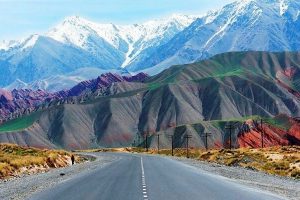 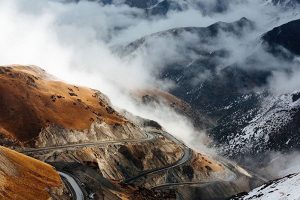 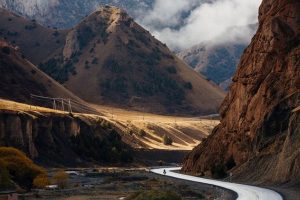 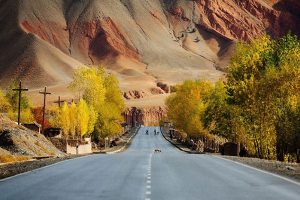 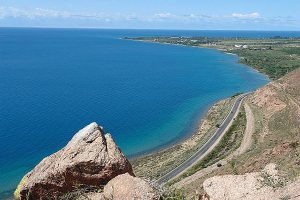 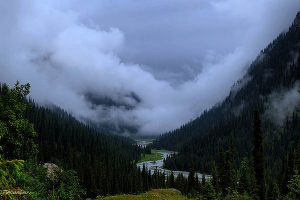 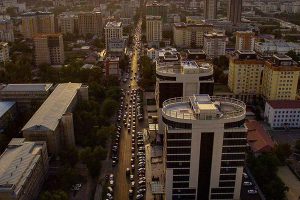 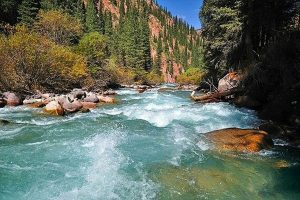 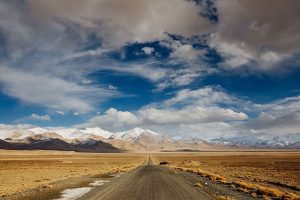